Mohamed Salah Ghaly who was born on 15 June 1992, is an Egyptian professional footballer who plays as a forward for the English club Liverpool and the Egyptian national team. 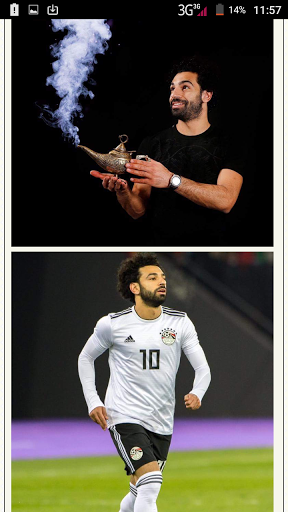 Salah started his senior career with hometown club El Mokawloon in the Egyptian Premier League in 2010, departing shortly thereafter to join Basel for an undisclosed fee. In Switzerland, he starred as he won the league title in his debut season, winning the SAFP Golden Player Award in the process. Salah's performances then attracted Premier League side Chelsea, and subsequently signed for the team for a £11 million fee in 2014. However, he was used sparingly in his debut season, and was allowed to leave on loan to Serie A clubs Fiorentina and Roma, with the latter eventually signing him permanently for €15 million.

Following consistent match-winning performances in Rome to lead them to second-placed finish and a record points-tally in 2017, Salah relocated back to the Premier League to sign for Liverpool for a then club-record fee of £36.9 million. During his second spell in England, Salah adapted his game from a natural winger to a complete forward, and quickly became the focal point of the team. He would go on to break the club's scoring record for a debut season, as well as becoming the first player ever to win three Premier League Player of the Month awards in the same season. He would further go onto be named in the 2017–18 PFA Team of the Year and as the 2017–18 PFA Players' Player of the Year, and was the recipient of the Premier League Golden Boot after registering a record 32 goals in 36 league games. 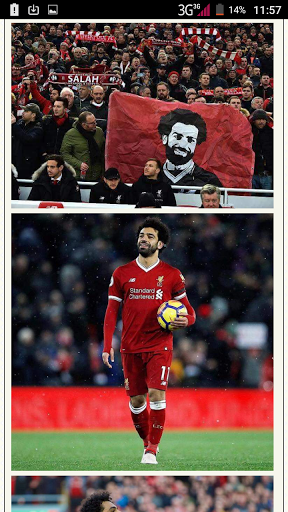 At international level, Salah represented Egypt at youth level, winning a bronze medal in the Africa U-20 Cup of Nations, and participated in the 2011 FIFA U-20 World Cup and the 2012 Summer Olympics. He was awarded the CAF Most Promising African Talent of the Year in 2012. Making his debut with the senior national team in 2011, he helped Egypt reach the final of the 2017 Africa Cup of Nations, and he became the top scorer during CAF qualification to help the team qualify for the 2018 FIFA World Cup. For his performances, Salah was named CAF African Footballer of the Year and the BBC African Footballer of the Year. He was also selected in the CAF Team of the Year and Africa Cup of Nations Team of the Tournament.

A quick, mobile, hard-working and tactical player, with good technique and an eye for goal, Salah is predominantly known for his speed, dribbling skills, first touch, and ball control, as well as his ability to use both his pace and flair on the ball in order to beat opponents, and create scoring opportunities for himself or his teammates. A versatile forward, he primarily plays as a winger on the right flank, a position which allows him to cut into the centre onto his stronger left foot, and either shoot on goal or play quick exchanges with other players; he can also play in the centre behind the main striker as either an attacking midfielder or second striker.

Upon signing for Chelsea, José Mourinho said of Salah: "He's young, he's fast, he's creative, he's enthusiastic. When we analysed him he looks the kind of humble personality on the pitch, ready to work for the team." Mourinho went on to say that Salah has "similar qualities" with "talented players" that he had worked with, such as Gareth Bale and Arjen Robben. His technical skills, pace, position and direct playing style led him to be nicknamed the "Egyptian Messi", in the Italian media.

Mohammed Salah married Maggi in 2013. Together they have a daughter named Makka who was born in 2014. His daughter is named after the holiest city in Islam and was born in Westminster Hospital in south west London. Salah is Muslim and often celebrates goals by performing the sujood. Liverpool fans created a chant to the tune of Dodgy's "Good Enough", saying that if Salah continued to score goals, they would convert to Islam. Salah gave his approval to the chant, and it has been citesh band Jd as an example of inclusivity.

Salah is nicknamed "The Pharaoh" by the press and his fans. More recently, Salah was given the nickname "Egyptian King" by Liverpool supporters, arising from a chant set to the tune of "Sit Down" by English band James.

WHAT OTHERS ARE VIEWING !!!

What do they offer?

Nairabet overview – that is one of the exceptional Nigerian having a bet merchandise we’ve visible. An clean to use interface, that is tremendously comprehensive. The ‘coming-up’ and ‘in-play’ sections can help you know what’s at the way and what you may presently bet on. There’s digital, casino and a weblog phase that increase this website online above most of its rivals. The ‘outright’ section takes players to an ante-post coupon wherein choices may be made across soccer’s biggest leagues – more sites ought to offer this. Our Nairabet overview will look at the critical components of your gameplay.

Do they have welcome bonuses?

whilst there’s no welcome bonus to talk of, there is a devoted promotions segment which helpfully lists the entirety Nairabet offer. The Nairabet overview wouldn’t be whole without this. there may be a goalless draw money back provide, cash out, a 100% accumulator bonus and double odds on lucky 15, 31 & …
Post a Comment
Read FULL POST »

the new Nigerian kids at the Block

each person is aware of approximately the ‘golden age’ of Nigerian players in the 1990s but what of the cutting-edge crop? The likes of Kelechi Iheanacho, Victor Moses and Alex Iwobi have all sparkled in the English most reliable League with out becoming complete-fledged stars. How top precisely can they be?

allow’s start with Kelechi Iheanacho who, for an all too quick duration seemed like is probably the future of man town’s attack. A prolific, quick striker who has impressed for Nigeria at each stage, his file in international reads 14 desires in 19 video games. His Manchester city file is 12 goals in 46 first team appearances, even though maximum of these have come from the bench. Having damaged into the group in 2015, he speedy made a placing influence with a prevailing intention against Crystal place having replaced Wilfried Bony, some thing he did with extra frequency because the season progressed. Iheanacho become quickly p…
Post a Comment
Read FULL POST »

Enter your email address below to subscribe to our newsletter.